Just when you thought you had seen every type of soft drink, a cool new concept has arrived aimed at amping up the offerings.

Welcome to Sodabox, a purveyor of craft fountain drinks and treats located in Apex. You’ll find more than a dozen types of familiar soda, but it’s the customization factor that makes things exciting. Think of it like the Coke Freestyle machine on steroids — but a mixologist creates it for you.

Here’s how it works: Select from among well-known carbonated choices like Coca-Cola, Mountain Dew, and Dr Pepper and then add syrups such as blackberry, pomegranate, or even a fruit puree. Or opt for a creatively curated concoction from the menu’s “Soda Love” section.

Beverages are made using fountain-poured soda along with primarily Torani-brand syrups and purees lined up on an impressive “flavor island.” Every drink is served over pebble ice.

“Our recipes are unique combinations that you wouldn’t normally think of,” said co-owner Scott Sorensen, 37, who runs the business along with his 34-year-old brother, Brent Sorensen. “This isn’t like going to the gas station and getting a 44-ounce Mountain Dew; this is a real treat.” 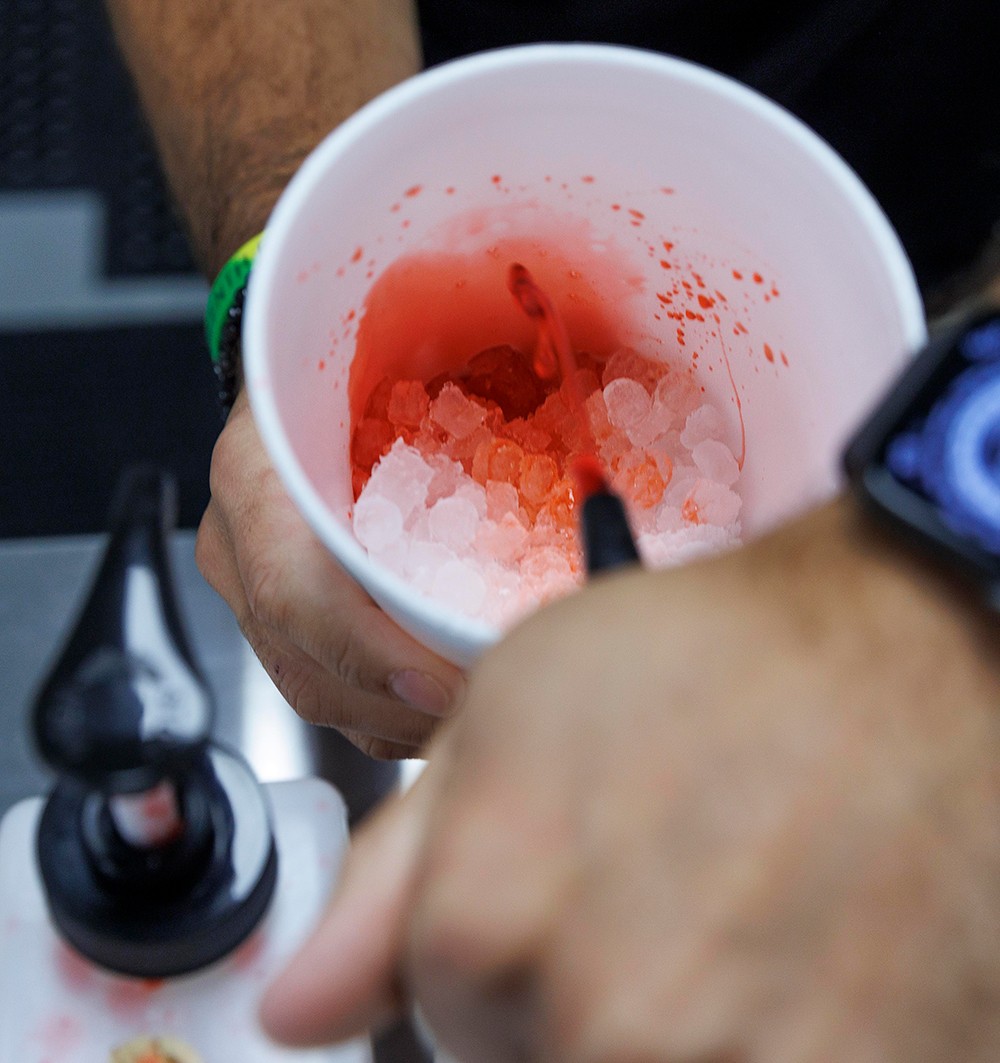 Scott said he formerly worked as a bartender, so he became proficient in mixing various types of drinks. After considerable thought, planning, and experimentation, he and Brent launched Sodabox.

“The South is the home of soda, because we’re in Pepsi’s backyard, and Coca- Cola is next door,” Scott said. “Soda has been around for the last hundred years, but there really hasn’t been that much innovation.”

Among the most popular menu items at Sodabox is Sprite-based crowd pleaser Pretty & Pink, which includes cherry, strawberry, raspberry, and passionfruit syrups. Then there’s Spin It Like a Helicopter with Cheerwine, cherry syrup, and peach and mixed berry purees.

“The one drink every single kid should always try is the Dirty Floater, which is root beer, vanilla, and cream,” Scott said. “It tastes just like a root beer float.”

“Seatown Pops is a nod to Seattle, where we are from, and we named it as a tribute to our late father,” Scott said.

Monster energy drinks are also accessible, including a sugar-free version. Lemonade, seltzer water, and organic tea round out the copious options.

Try the delectable whoopie cookies made by a local baker.

“We really want to make this about the experience for our guests,” said Brent. “That’s why the front of the house is designed for people to take selfies and to have fun.”

David McCreary is a freelance food writer for Cary Magazine and Main & Broad. When he’s not scouting out the next buzz-worthy local eatery, David enjoys golf, tennis and modern rock music. He especially loves spending quality time with his wife, Jenny, with whom he recently celebrated 25 years of marriage. David and his wife have two children, Noah and Joy, and live in Fuquay-Varina.